on December 31, 2019
I set out to survey the flowering plants of my recently-purchased land, which almost immediately expanded to an informal general life survey. I used the incredible tool iNaturalist to track observations. My iNat project is "A Land Like This One". Thank you to Nathaniel for his contributions and company.

Statistics
This data was collected over approximately 20 visits from March through December, averaging perhaps 3 hours of active search/exploration time per visit. At the time of writing this... 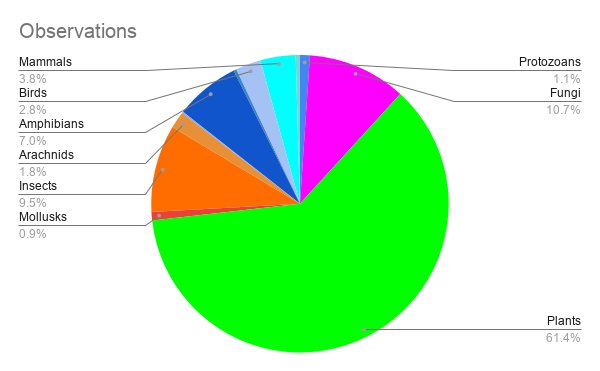 The numbers are strongly skewed by sampling bias and my areas of interest/knowledge:
The Land
The land consists of 6 acres of hemlock and birch-dominated forest in Windsor NH. Natural communities include hemlock forest, subacid forest seep, herbaceous low riverbank, an emergent marsh (unsure which), and a possible vernal woodland pool. The plot is bisected by Black Pond Brook, which flows out of Black Pond. 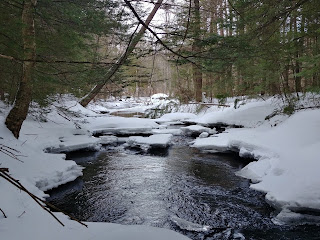 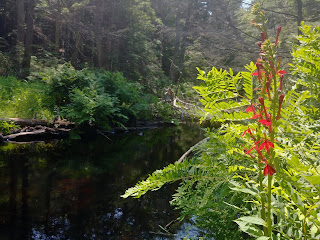 Black Pond Brook flows year-round. It measures approximately 15 feet at its narrowest point and perhaps 30 at its widest. Depth varies by several feet based on season and precipitation. There is a section of emergent marsh with great diversity of herbs and shrubs. It is home to small fish, Virile Crayfish (Faxonius virilis), frogs, and salamanders.

The largest hemlock found had a diameter at breast height of 20.7 inches and the largest yellow birch 20.4 inches. Neither of these species is very good for estimating the age of a forest.
As expected in a Hemlock wood, the understory is very open with scattered Striped Maple (Acer pensylvanicum) and Hobblebush (Viburnum lantanoides). 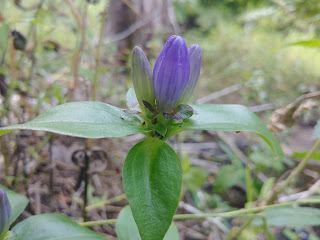 I neglected birds lamentably, but did record a Great Blue Heron (Ardea herodias) who returned repeatedly to hunt in the brook, several Ruby-throated Hummingbirds (Archilochus colubris), and three visits from a Barred Owl (Strix varia).

I identified 7 species of amphibians. Eastern Newt (Notophthalmus viridescens) was by far the most commonly observed. The only reptile was a Painted Turtle (Chrysemys picta).

Contributions
All observations were recorded to iNaturalist.
None of the plant findings were rare, but NH Natural Heritage's checklist does not list these species as occurring in Hillsborough County:
I contacted the state botanist, Bill Nichols. He asked me to create herbarium specimens next summer so he can officially record them.

*On iNaturalist, "research grade" means the observation is not of a captive or cultivated organism, has location coordinates, has a photo or sound recording as evidence, has been identified to the species level by two or more users, two thirds of whom must agree on the ID.

Note: I am an enthusiastic amateur naturalist, and I have a lot to learn. I am interested in any corrections or suggestions others have. Thank you.
December 2020 note: I updated the links because most were broken when I changed my iNaturalist project this year.