on August 20, 2020
I'm always delighted to find a species at the Witchwood that I've never found there before, but it's even more special when it's something I've never seen anywhere before. This Narrowleaf Gentian was one of those. I found a different gentian species there last year, and I assumed this was the same one until I put it on iNaturalist. It's wonderful having a place I can post my observations and get confirmation or correction!
This arrowwood was another new find this week. It's the third viburnum species on my land along with hobblebush and wild raisin, which are in fruit right now.
I'd never seen virgin's-bower in fruit before - isn't it beautiful?

This was probably the last week I'll see monkeyflower in bloom. I only found two or three plants still blooming.

This was my first time finding pondweed in bloom. There are a number of similar species in the genus - I don't know which one this is.

There's a spot by the vernal pool with dozens of downy rattlenake-plantain orchid plants in three large clusters around a tree. Last year tons of them bloomed, but this year I found only a single flowering stem alongside last year's empty seed pods.

I was so excited to find this pinesap, though I missed the flowering stage - it's in fruit now. You can tell because the flower heads start nodding downwards but turn upwards like this when they're pollinated. Last year I found the dried stems of flowers from a previous year near a corner of my property. I watched carefully for new stems there last year, but none appeared. I obviously wasn't watching closely enough this year since I missed flowering, but I'm so glad I found them!

Jack-in-the-pulpit is in fruit - it will turn a gorgeous bright red soon. See the dried remnant of the flower spathe attached to the fruit?

The purple-fringed orchids are also in fruit. Last year the deer ate half of the flowers. I'm hopeful that this year they will reach maturity and release their dust-like seeds. Most of them are just off my land, and I'm hoping that lots of seeds will drift my way and germinate.
This green frog was perched very curiously 2 or 3 feet up a boulder, overseeing the brook.
Check out the bobcat crossing the brook - isn't it gorgeous?! 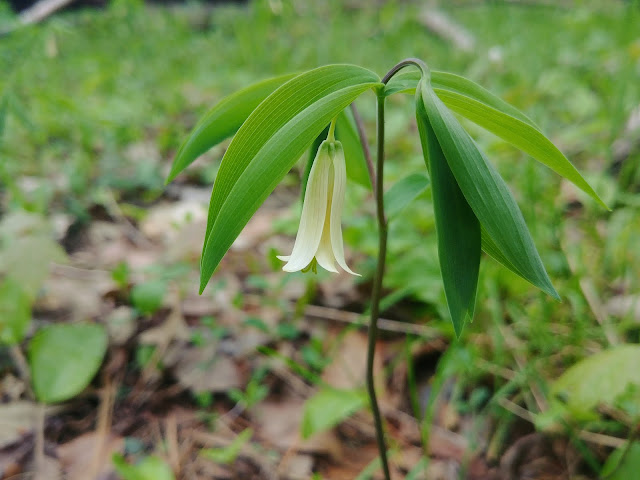 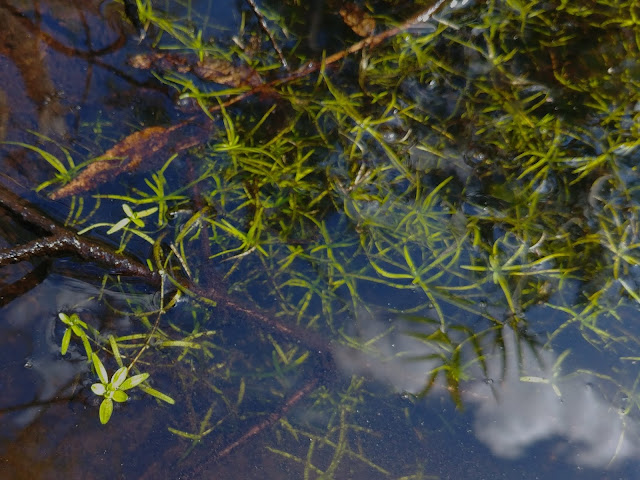